Sign In
Schedule Demo
CASE STUDY
McHenry County Leverages ‘Hidden Gem’ DebtBook to Simplify Debt Schedules and Financial Statements
“In the past to prepare debt schedules, it was a process of three to four weeks. With DebtBook, it’s literally just a matter of selecting the fiscal year and downloading the information. Going from weeks to just a few clicks -- that’s a significant improvement for us.”
Kevin Bueso
Chief Financial Officer, McHenry County, Ill.

As Kevin Bueso joined McHenry County Finance Team as the new Chief Financial Officer, there was a realignment of responsibilities throughout the organization. One change was to task the finance team with preparing financial statements, which the county’s internal audit team had handled previously.

For Bueso, the role shift was a chance to aggregate and reorganize financial records pertaining to general obligation bonds and leases, as well as to develop new processes moving forward.

“Whenever it was time to do an audit or prepare financial reports, we’d have to reach out to each elected official and department to ask for spreadsheets and lease documents,” said Bueso. “It was a lengthy process.” Bueso had not yet considered how to systemize the process, but when DebtBook reached out to Bueso, he was interested in learning more and scheduled a demo. “It was a no-brainer,” he said.

McHenry County was navigating the following challenges in its debt and lease management process:

Debt and lease records were scattered across the county’s more than 40 departments. Some information was located in physical documents and folders, and other information was housed in spreadsheets. When it came time for an audit or compiling financial reports, a staff member would have to reach out to each elected official or department head to track down the pertinent information.

Without a defined system in place, each debt obligation, lease, and related transaction had its own process, so the corresponding data collection and reconciliation was highly nuanced and time-consuming.

Errors and lack of visibility

With each transaction stored and treated differently, it was hard to standardize the data when compiling it into financial reports. Previous reports had contained errors, adding time to the audit process. Under the existing process, it was also a struggle for the finance team to gather and organize the county’s lease records, which increased the risk of underreporting obligations since the team didn’t know what they didn’t know.

When Bueso joined the county, he championed financial transparency but found it difficult to accomplish with data and documents scattered throughout the organization. The finance team needed to see the whole picture so they could share it with internal and external stakeholders.

When evaluating solutions, Bueso found DebtBook to be the only consolidated solution to manage both debt and leases. DebtBook also provided value to McHenry County in several other key areas:

DebtBook is a cloud-based platform, which allows the county finance team to upload and easily access pertinent records at any time from anywhere, enabling the team to collaborate more efficiently and identify gaps in their process.

The software also helps the county department heads and stakeholders better align. First, the finance team requires that each department submits their debt and lease information, which then gets uploaded to DebtBook.

“We can go to decentralized departments and decentralized elected officials and say, ‘Now, we have a leaner, more transparent method for tracking information,’” Bueso said.

Having a centralized tool also reduces the number of errors staff members may make due to information being located across different systems and departments. “Last year with DebtBook, we didn’t experience any errors at all.”

Because the county works with outside auditors, it’s important to Bueso that a system be able to foster collaboration. With DebtBook, he was able to grant read-only access to auditors and board members.

“I like that I can just grant people access to the system, whether it’s for the board or the auditor. They are all very happy to use DebtBook because they can document or download the information they need without contacting the Finance team with a request or having to email documents back and forth. It’s just very easy for anybody to figure it out,” Bueso said.

DebtBook’s user interface balances simplicity with depth. Bueso found the software was a clean and easy way to access information and track funding.

“It’s really intuitive,” Bueso said. “And it’s easy for anybody to understand – even those who may not be in accounting.”

Using DebtBook, the finance team and outside auditors could simply click and download notes for financial statements, which saves a lot of time. “The auditors are very happy with that process because they can log in and monitor or download whatever they need, and documents are attached to every issuance. So, we don't really need to be emailing back and forth.”

Once the finance team implemented DebtBook, they found that the software streamlined many heavily manual tasks, such as preparing debt schedules. In the past, it took three to four weeks to prepare debt schedules for the county’s leases and general obligation bonds. With DebtBook, this preparation was complete with a simple click.

“Unless we have a new issuance, it’s literally just a matter of selecting the fiscal year and downloading the information,” Bueso said. “That’s a significant improvement for us.”

As time went on, having a single source of truth allowed the finance team to become more transparent.  Specifically, the team produced scenario plans and visualizations for board members and taxpayers to view the county’s debt schedules.

“They were all pleased with that information and our ability to just pull it up on a screen,” Bueso said. “It’s very powerful to show how in two years we’re going to be debt-free.”

Today, Bueso is pleased with his experience with DebtBook and frequently refers the platform to his contemporaries at networking events and meetings. “I believe DebtBook is one of those hidden gems, as far as tools go, to manage leases and general obligation bonds,” Bueso said. “It’s really a solution I feel like more people need to be aware of.” 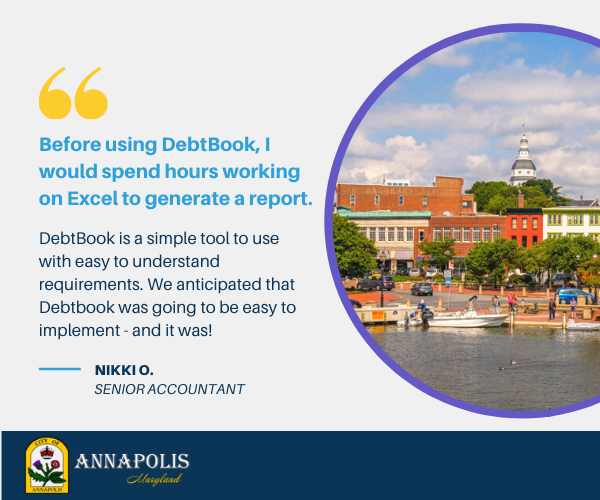 The City of Annapolis, MD Streamlines Their Finance and Accounting Processes With DebtBook 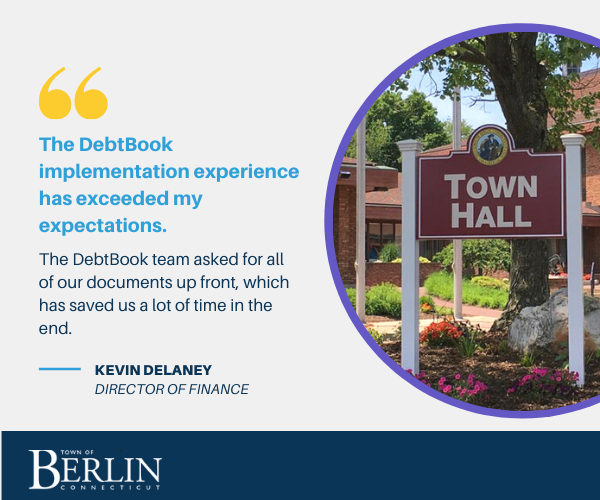 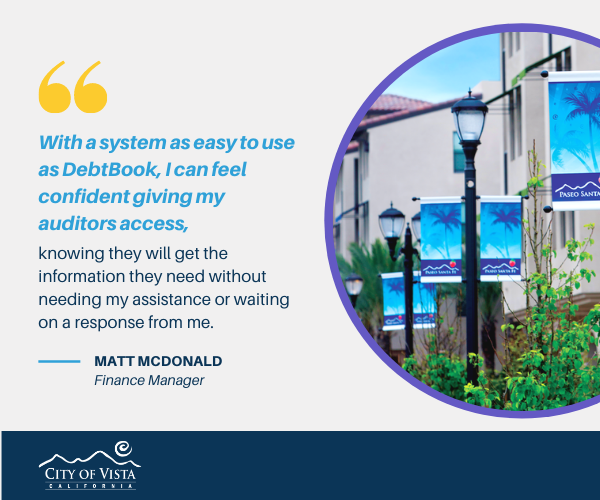 The City of Vista, CA Improves Efficiency and Builds Confidence in Their Financial Data with DebtBook